Macon-Bibb County officials will hold a Groundbreaking Ceremony on Friday, April 3, at 10:00 a.m. to mark the beginning of construction on the Second Street Corridor Connecter. The Ceremony will be held on Mercer University’s intramural field near the intersection of Little Richard Penniman Boulevard and Nussbaum Avenue. On Monday, April 6, the lower portion of Little Richard Penniman Boulevard will be closed. (Details below.)

This will be the first phase of a three phase construction project that is estimated to take 18 months. Once complete, the Connector will have sidewalks, bicycle lanes, lighting, and landscaping, as well as upgraded storm sewer systems.

“This is the piece of the Corridor that will bring the two different sides of our urban core together with a pedestrian and bike friendly connection,” says Mayor Robert Reichert. “In other areas, we’ve added bike lanes, improved sidewalks, and increased greenspace, and we continue to plan for a transit alternative, such as an electric bus.”

“Macon-Bibb County is currently on the move,” says Commissioner Larry Schlesinger. “The Second Street Corridor project that voters approved is not only emblematic of the renaissance that is occurring, it is a harbinger of the growth and renewal that assuredly will follow in its path.”

Phase 1 will begin just west of Nussbaum Avenue and will realign Little Richard Penniman Boulevard through the intramural field to cross Telfair Street and end just east of it.  Phase 1 will also include realigning Edgewood Avenue into the new Connector.

Phase 3 will be the construction of the new Connector over the railroad and tying in Phases 1 and 2 to complete the project.

Phase 1 road closure and detours
Construction on this phase is expected to last between three and four months. To minimize construction time and reduce expenses, the entire portion of Little Richard Penniman Boulevard between Plant Street and Telfair Street will be closed beginning Monday, April 6.

People traveling into Macon-Bibb from I-75 are encouraged to use the Eisenhower Parkway or Forsyth Street exits to reduce traffic traveling through the neighborhoods. There will be detour signs placed in the area to help neighborhood traffic get around the construction. 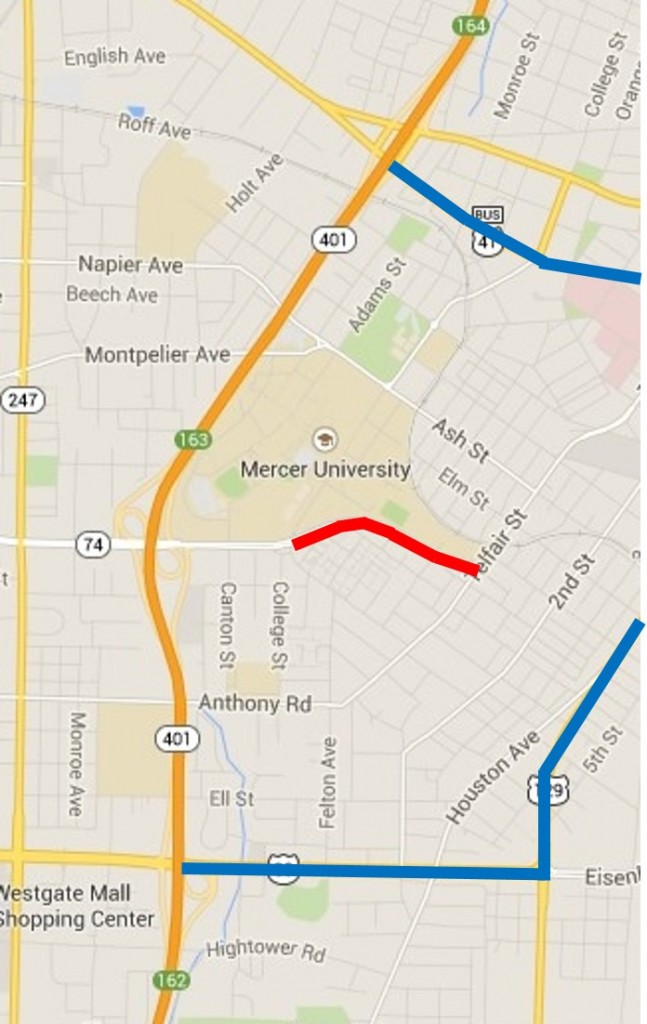 Any closures occurring with Phases 2 and 3 will be announced closer to the start of construction for them.

This past December, Macon-Bibb County reopened the block of Second Street between Cherry and Poplar Streets as a Vision Block for the Corridor to show people what will the entire street will look like. It features bike lanes, reverse angle parking, landscaping, shade trees, benches, improved sidewalks, an irrigation system, and more. In addition to the work being completed with SPLOST funds, Georgia Power, Atlanta Gas Light, and the Macon Water Authority used this opportunity to upgrade and improve its electrical system to meet the growth taking place Downtown. Click here for a MaconBibbTV feature on the Vision Block.

In late February, a team from Macon-Bibb County, the Macon Transit Authority, and Strong Cities, Strong Communities (SC2) visited Tallahassee, FL, and StarMetro – the city’s public transit provider – to learn more about its electric bus system. In August 2013, it was the first transit agency on the east coast to deploy electric buses, and those buses are now 5% of its fleet) and serve a fixed 18-mile route. Click here to read more about the visit and this alternative.

Macon-Bibb County is currently developing Mid-City Square, a new park located at the intersection of Second and Pine Streets. Several of the properties have been purchased and the buildings have been torn down to make way for new greenspace. Also, work is set to begin soon on the creation of Pinnacle Park on Second Street in the Tindall Heights neighborhood. Located on the site of the former Boys and Girls Club, it will be a passive park with trails, benches, landscaping, and a great view of Downtown.

Using Tax Allocation District bond funding, Macon-Bibb will be building a signature pedestrian bridge over Mercer University Drive that will serve as a gateway into the city. Its construction helped bring almost $50 million in investment in Tindall Heights.