In 2011, Macon began a planning for the redevelopment and revitalization of the Second Street Corridor as a “multi-modal spine” from East Macon and I-16, through Downtown, past Mercer University, and to I-75. It would connect residential areas, businesses, universities, medical facilities, and government facilities to each other while linking two regionally significant facilities, I-16 and I-75.

“We are preparing our city for the needs of its residents, businesses, and visitors now and for the next several decades,” says Macon-Bibb Mayor Robert Reichert. “People returning to a more urban lifestyle – instead of a suburban lifestyle – are looking for other ways to get around on a regular basis, like walking, biking, and viable public transit.”

In late February, a team from Macon-Bibb County, the Macon Transit Authority, and Strong Cities, Strong Communities (SC2) visited Tallahassee, FL, and StarMetro – the city’s public transit provider – to learn more about its electric bus system. In August 2013, it was the first transit agency on the east coast to deploy electric buses, and those buses are now 5% of its fleet) and serve a fixed 18-mile route.

The team was able to meet with the Mayor of Tallahassee, StarMetro leadership and employees, and representatives from the Center for Transportation and the Environment. Macon-Bibb wanted to learn more about the successes, opportunities, and challenges in deploying the electric bus technology as a transit alternative and begin considering its viability and expansion potential in Macon-Bibb along the Second Street Corridor.

“An electric bus system could provide us a way to bring a fixed transit system to the Second Street Corridor sooner than anticipated and allow us to begin exploring how to expand to other areas of Macon-Bibb,” adds Mayor Reichert. “We have a great team working on finding new modes of transportation, and I want to thank our SC2 Team for making the connection with StarMetro and planning the trip to Tallahassee.”

About StarMetro’s Electric Bus Program
In 2010 and in 2012, the Federal Transit Administration (FTA) awarded StarMetro more than six million dollars from the Transit Investments for Greenhouse Gas and Energy Reduction (TIGGER) grant to replace diesel buses with all electric buses and associated equipment. The total award was $6,466,003: $4,900,000 for the buses, $1,165,000 for infrastructure, $52,000 for vehicle introduction, and $349,003 for program management and data collection and reporting

In 2011, StarMetro signed a contract with Proterra, Inc. to purchase three zero-emissions, all-electric buses and a charging station, which would be installed at the transfer center, C.K. Steele Plaza. Two additional buses and supporting equipment were later purchased. The Center for Transportation and the Environment (CTE) was engaged by StarMetro to manage the project.

These electric buses have fast-charging capabilities, allowing for maximum run and minimum wait times. On-route charging can be completed in the time to stop for passengers. Once the bus is within range of the charging station, the station connects with the bus and limits its speed to allow for connection. Although the bus is speed limited, the driver remains in full control of the bus at all times during the charging station process.

StarMetro’s fast charge station is located at their transfer facility at C.K. Steele Plaza and rapidly charges batteries from 10 to 95% in 10 minutes or less. Since the C.K. Steele Plaza is the stop for six of the 12 StarMetro service routes, addition additional electric bus routes in the future is possible. In addition to the fast charge station at the transfer center, StarMetro has two stationary/shop chargers at their bus facility.

This past December, Macon-Bibb County reopened the block of Second Street between Cherry and Poplar Streets as a Vision Block for the Corridor to show people what will the entire street will look like. It features bike lanes, reverse angle parking, landscaping, shade trees, benches, improved sidewalks, an irrigation system, and more. In addition to the work being completed with SPLOST funds, Georgia Power, Atlanta Gas Light, and the Macon Water Authority used this opportunity to upgrade and improve its electrical system to meet the growth taking place Downtown.

MaconBibbTV was there to cover the creation of the Vision Block, and you can watch that coverage – including interviews, improvements, and more – by clicking here for the closure of the block and clicking here for its reopening.

Macon-Bibb County is currently developing Mid-City Square, a new park located at the intersection of Second and Pine Streets. Several of the properties have been purchased and the buildings demolished to make way for new greenspace. 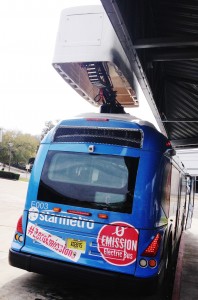 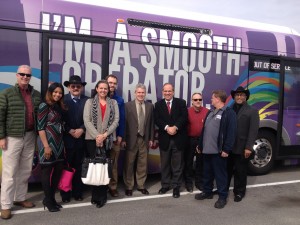 A team from Macon-Bibb traveled to Tallahassee to learn about its electric bus line.

Electric buses make up 5% of Tallahassee’s fleet and serve an 18-mile fixed line. 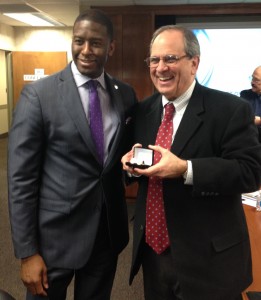