Work to extend the Second Street Corridor Vision Block will begin Monday, January 14. (Barricades have already been placed in the area changing the traffic pattern.) This project – which should take approximately six months – will improve the block and half between Poplar Street and Plum Street Lane, taking the Vision Block from where it currently ends to where the future MidCity Square would begin. The area will get new sidewalks and lighting, benches and landscaping, bicycle lanes, turn lanes for vehicles, and more.

“The growth of businesses and development along the initial Vision Block of the Second Street Corridor has been amazing, and we want to make the connection between it and the future MidCity Square,” says Macon-Bibb County Mayor Robert Reichert. “Between our consolidated governments and several partners, we have created several new centers of activity, and it’s time we made the investment in connecting them in a way that is safer and friendlier for walkers, cyclers, and drivers.”

During construction, lanes will be shut down for work to happen, but two-way traffic will be allowed throughout the project. Pedestrian traffic for residents and businesses will be allowed. (A map of the impacted area is below.) 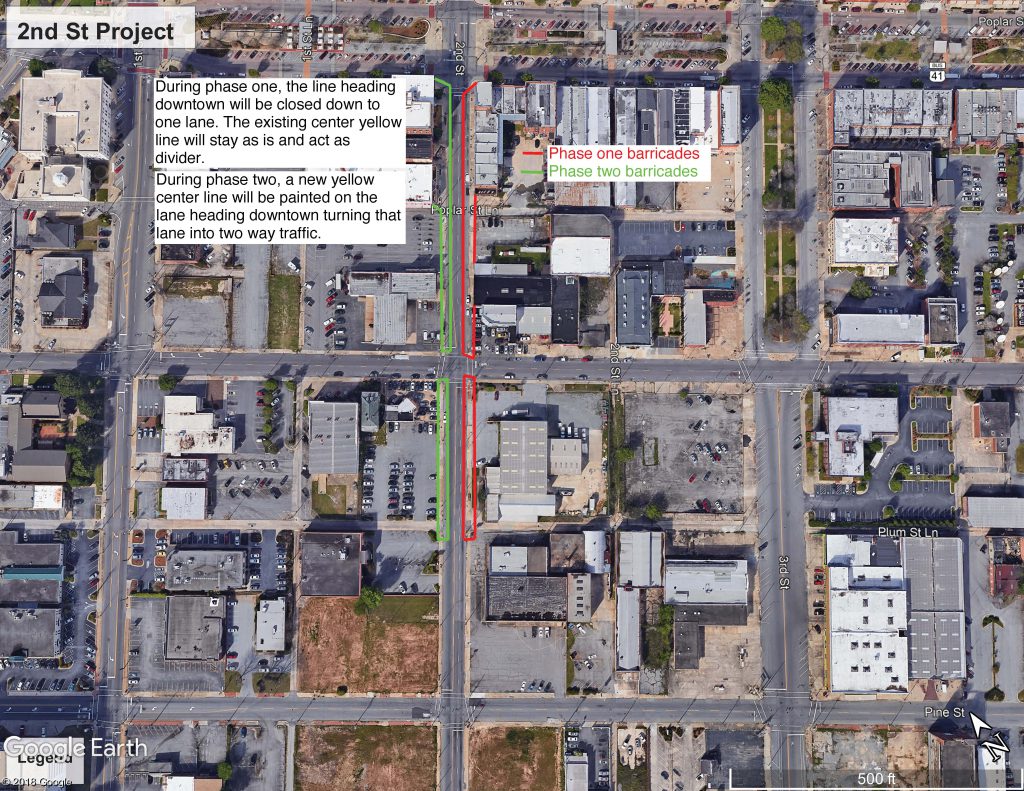 Funding for this economic development and public safety project is a $1.5 million grant from the Georgia Transportation Infrastructure Bank (GTIB), which is a revolving infrastructure investment fund created in 2008 by Georgia legislators and administered by the State Road and Tollway Authority (SRTA).

“The GTIB program continues to be an important funding resource for local governments and community improvement districts throughout Georgia to jumpstart the completion of critical transportation projects. The projects receiving awards today will benefit communities across our state, enhancing mobility in local communities and helping Georgia’s economy continue to thrive,” Governor Nathan Deal said in a press release when the grant was first announced.

Macon-Bibb was one of 22 local and state governments, and Community Improvement Districts, to receive about $23.6 million for transportation infrastructure projects. 41 applications were submitted for this competitive grant process that provides funding from the GTIB for capital expenses related to road and bridge infrastructure projects. Criteria for grant selection included: transportation/engineering merit, economic merit; local, state, and federal matching funds; and project specific like phase and feasibility.

About the Second Street Corridor
The redevelopment and revitalization of the Second Street Corridor is a major project in Macon-Bibb County’s Forward Together Strategic Plan and is included in the Infrastructure Improvement Strategic Focus Area, while the Vision Block is a part of Safe Neighborhoods and Safe Neighborhoods Area. The creation of greenspace and parks (including MidCity Square and Pinnacle Park) will improve the Quality of Life for residents, visitors, and employees all along the Corridor.

The Second Street Corridor project was started with funding from the voter-approved Special Purpose Local Option Sales Tax (SPLOST), and it stretches from East Macon through Downtown, connects to Little Richard Penniman and Mercer University Boulevards, and creates gateways into Macon-Bibb at either end. Long-term, Macon-Bibb County wants to extend the Corridor further west along Mercer University Boulevard to the Macon Mall and Middle Georgia State University.

In December 2014, Macon-Bibb County reopened the block of Second Street between Cherry and Poplar Streets as a Vision Block for the Corridor to show people what will the entire street will look like. It features bike lanes, reverse angle parking, landscaping, shade trees, benches, improved sidewalks, an irrigation system, and more. In addition to the work being completed with SPLOST funds, Georgia Power, Atlanta Gas Light, and the Macon Water Authority used this opportunity to upgrade and improve its electrical system to meet the growth taking place Downtown. Click here for a MaconBibbTV feature on the Vision Block.

Macon-Bibb County is currently exploring the potential for developing Mid-City Square, a new park located at the intersection of Second and Pine Streets. Several of the properties have been purchased and the buildings have been torn down to make way for new greenspace. Also, a new Pinnacle Park was created on Second Street in the Tindall Heights neighborhood. Located on the site of the former Boys and Girls Club, it includes a passive park with trails, benches, landscaping, and a great view of Downtown.

Using Tax Allocation District bond funding, Macon-Bibb worked with partners to build a signature pedestrian bridge over Mercer University Drive that serves as a gateway into the city. Its construction helped bring almost $50 million (and increasing) in investment to the Tindall Heights area. A connecting bridge between Second Street and Mercer University Drive has been designed and utility work has already begun to make the area ready for construction. That portion of the project is expected to begin in the next several months.

About the Forward Together Strategic Plan
In January 2014, Macon-Bibb County began working with the University of Georgia’s Carl Vinson Institute of Government to develop the first Forward Together Strategic Plan. This process lasted more than a year and involved multiple retreats, work sessions, and meetings with department heads, organizations, and stakeholders. The planning process was funded with a grant from the John S. and James L. Knight Foundation.