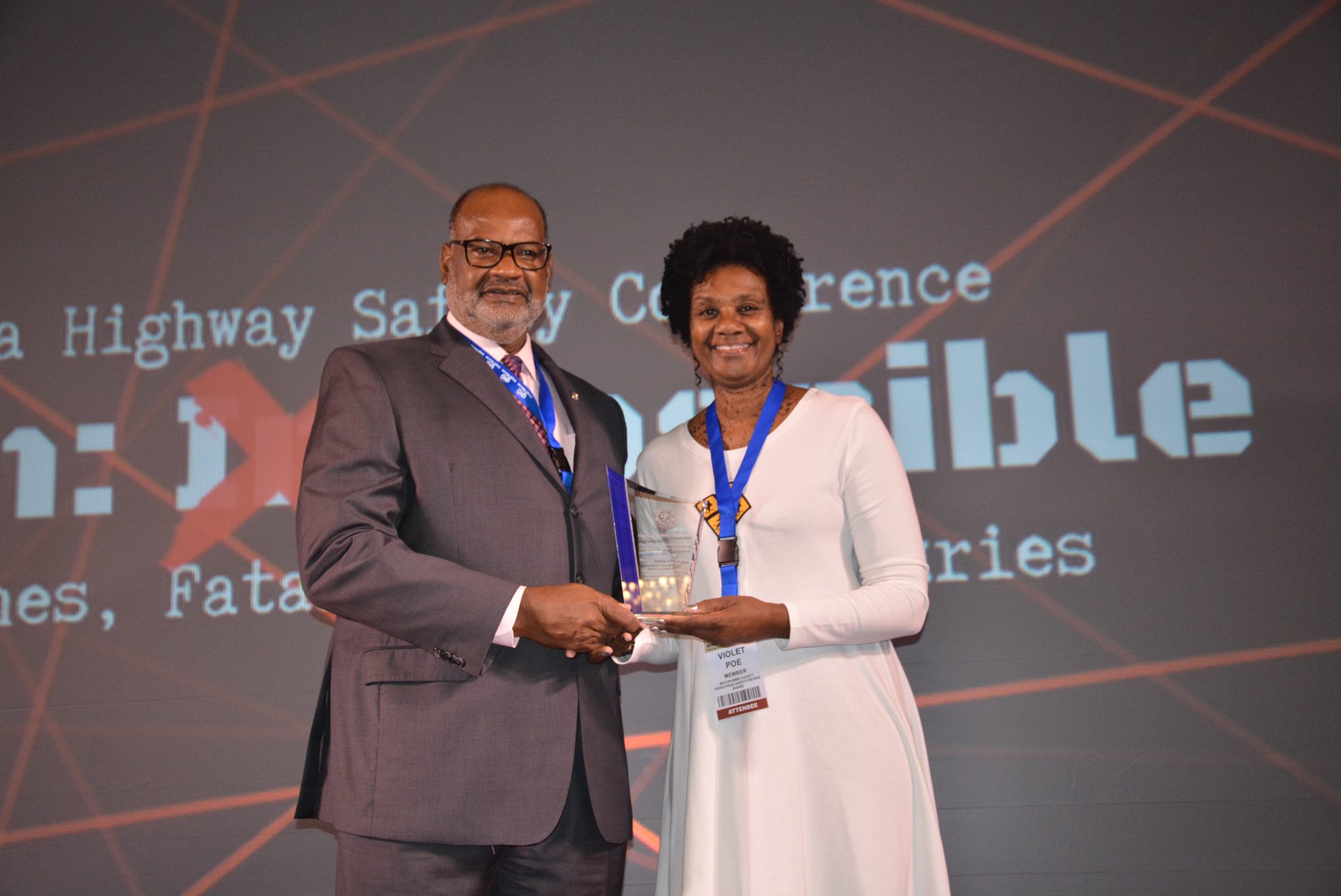 Ms. Poe earned this prestigious award for her development and implementation of three programs aimed at reducing the number of pedestrian crashes, fatalities, and injuries along Macon-Bibb roads: “Cross the Walk,” “On the Move,” and “Alive Beyond 92.”

The Cross the Walk campaign began in 2016. This campaign focused on different pedestrian safety aspects and used billboards, presentations, outreach to student groups, bus wraps, mascots, PSAs, and more. Click here for a MaconBibbTV feature video on this campaign.

The On the Move campaign also began in 2016 and focuses on different pedestrian safety aspects. Board members hand out (to people walking and any drivers and passengers that stop by selected locations) education safety cards and safety reflective armbands, explain the information on the card, and demonstrate how the bands work.

Locations for this education campaign were selected because they are heavily traveled by pedestrians and are on or near State Roads or are near the locations of pedestrian fatalities between 2012 and 2016. On the Move is paid for with a $20,785 grant from the Governor’s Office of Highway Safety that was awarded in October 2017. It also uses billboards, presentations, outreach to student groups, bus wraps, mascots, PSAs, and more to reach people. Click here to watch a video of that announcement, and click here for a MaconBibbTV feature on the campaign.

Alive Beyond 92 is an effort to reach out to students in the Southwest High School zone. Three of the five schools in that zone are in close proximity to two of the five heavily-traveled, high-risk state routes having a high number of pedestrian fatalities. Volunteers use educational and hands-on activities to help children learn how they can be safe pedestrians and live a long, healthy life.

About the Pedestrian Safety Review Board

Responding to concerns about pedestrian safety, the Macon-Bibb County Commission approved an ordinance sponsored by District 3 Commissioner Elaine Lucas that created the Pedestrian Safety Review Board. It is charged by the Commission with finding ways to make all of the county’s roads, streets, and alleys safe for pedestrians.

Meeting each month, the Board establishes a forum for the Sheriff’s Office, Health Department, School District, county departments, Planning and Zoning, elected officials, AARP, and concerned citizens to develop strategies for creating a safer environment for pedestrians. To learn more about the Board, click here.