At its annual conference in early May, Georgia GMIS honored Macon-Bibb County Information Technology (MBIT) projects and employees with three state awards. Earning recognition were the MaconInsights Data Academy Project with the Best Practices Award, Jeff Griffin with the Outstanding Professional Award, and Joe Nabhan with the Spirit of GMIS Award.

“I am proud to be executive sponsor of the MaconInsights Data Academy Project and to have the pleasure of working with outstanding IT professionals Jeff Griffin and Joe Nabhan. This awards program is a competitive and highly personalized recognition system for a job well done,” says Macon-Bibb CIO Brett Lavender. “Continuous improvement and collaboration are the common threads in the three state awards received. Our team puts people first and then surrounds them with the support, processes, and disciplines that recognize their efforts.” 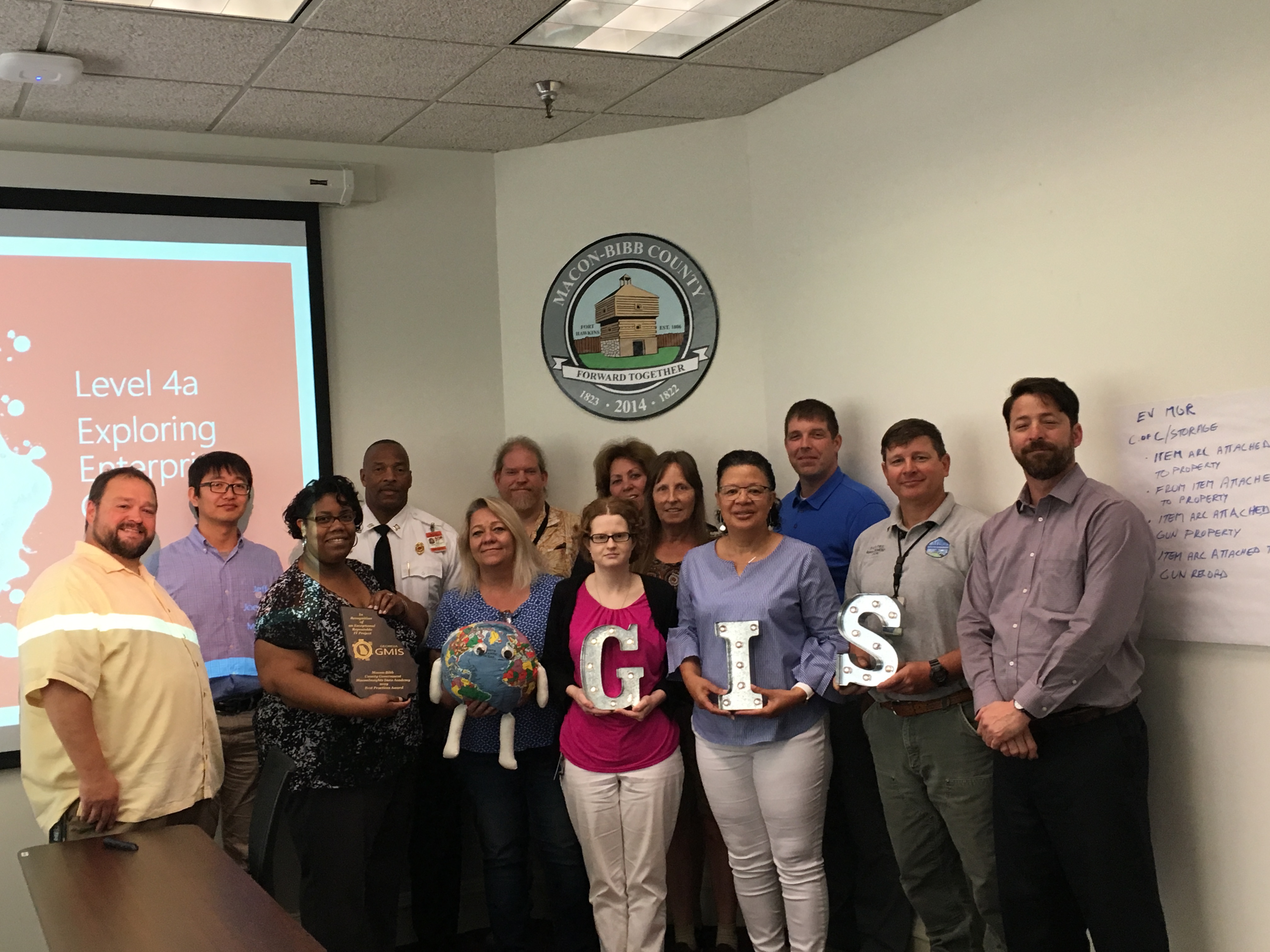 The MaconInsights Data Academy earned the Best Practices Award for its focus on team-based,citizen-centric approach to collaboration and problem solving in local government. Its goal is to simplify the optimize the use of data that departments and agencies already produce so that they can work more efficiently in their areas and with each other, better prioritize resources and staff, and foster a stronger sense of collaboration.

“The MaconInsights Data Academy represents a unique and innovative change to the way our employees and community partners think about data and its use within their day-to-day operations,” wrote Jeff Griffin, GIS Manager, wrote in the nomination. “This project is the roadmap that makes it possible to bridge the very real gap between the demand for services by our citizens and the limited resources and capabilities of our staff”

Outstanding Professional Award
Jeff Griffin, Macon-Bibb’s GIS Manager, received the Outstanding Professional Award after managing IT’s GIS Division since 2016.During that time, he has spear-headed the adoption of open data for the local government and partners and the creation of the award-winning MaconInsights, which promotes transparency, accountability, and data-driven decision making.

He has created a community of IT professionals by chairing the first Middle Georgia Chapter of the Georgia URISA. Jeff also serves and presents at the state level on the importance of GIS, and he has earned several state and national recognitions and certifications.

“Jeff’s commitment to continuous improvement and innovation in government information systems is truly an asset to Georgia and GMIS,” wrote Macon-Bibb CIO Brett Lavender in his nomination letter. 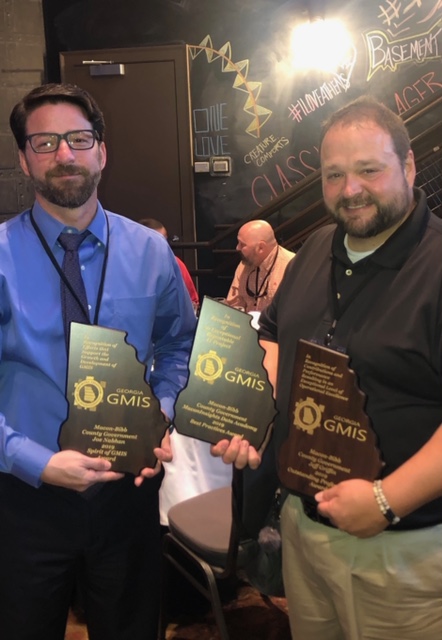 Joe Nabhan, MBIT Programmer Analyst, earned the Spirit of GMIS Award for his efforts to support GMIS and Georgia’s Government IT community through training, being actively involved in conferences, offering leadership and support where needed, and professional development. Joe has been recognized at the state and national level for his projects to improve organizational efficiency using GIS, and he is a sought-after presenter on how other organizations can replicate that success.

He has been a noted professional in the GIS industry for more than 15 years, working in both the public and private sectors, including local government, electric utilities, map companies, and a ski resort.

“Joe’s commitment to continuous improvement, innovation, and collaboration in governmentinformation systems is key to what makes Georgia GMIS a great and growing organization,” Lavender wrote in his nomination. “Joe has worked tirelessly with local government professionals, private sector developers, regional partners, and his community to ensure that they have information products that provide them with the data they need to make data-driven decisions and communicate success.”

About Georgia GMIS
Georgia GMIS is a state chapter of GMIS International which is a professional IT association of worldwide government IT leaders dedicated to providing best practice solutions for initiatives by providing its members with enhanced professional development, training, conferences, awards and networking while offering leadership though advocacy, research and shared experiences. GMIS International’s primary mission is to leverage the collective knowledge of our members.

In 1971, a group of IT professionals, realizing the need to foster the sharing of experiences among all levels of government involved in providing IT services, organized GMIS International. Today, we have members in 35 states. We have 13 State Chapter affiliates and we have 7 International Affiliates.