‘The state of our community is strong’: Mayor Miller stresses team effort at State of the Community 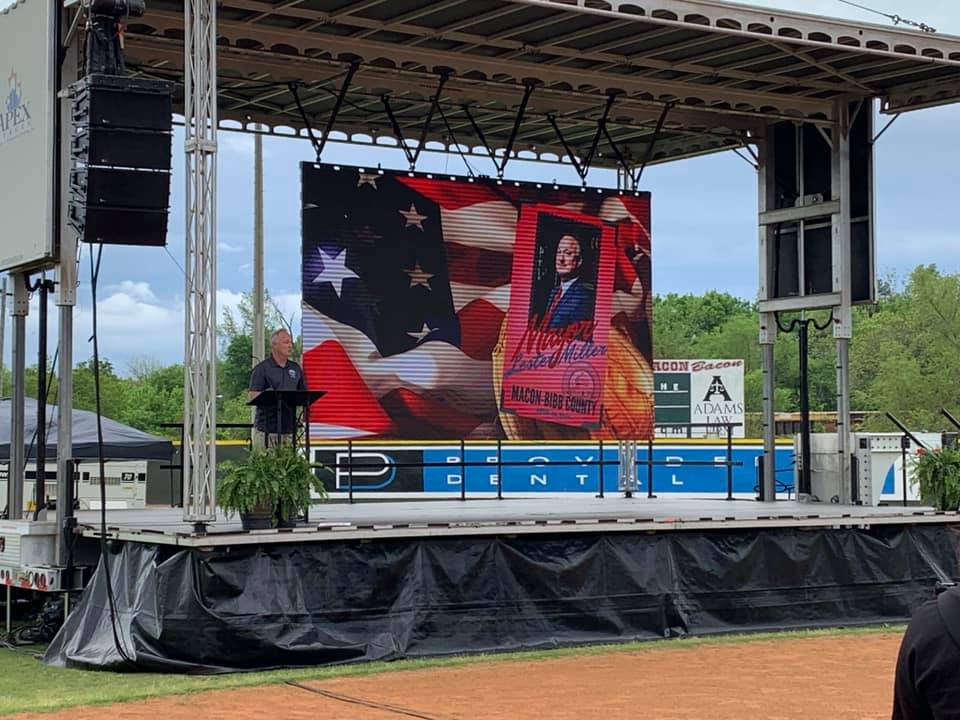 On Thursday, April 15, 2021, to the tune of DJ Khaled’s “All I Do Is Win,” Mayor Lester Miller ran to the stage at the center of Historic Luther Williams Field for his first State of the Community speech. Dozens of Macon-Bibb County leaders, who were sitting in the field, could not help but clap and cheer him.

After a rough year of dealing with a pandemic, the Greater Macon Chamber of Commerce hosted its annual luncheon on Macon Bacon territory, in an effort to keep people outside and socially distant. It was a unique luncheon as guests enjoyed baseball food staples like burgers and hotdogs, before hearing what Mayor Miller had to say about his first 100 days in office.

“As your 42nd Mayor, standing on a field where the great #number 42 Jackie Robinson played and where an amazing movie about him was made, I am reminded of his words,” Mayor Miller said near the beginning of his speech. “’A life is not important except in the impact it has on other lives.’”

Emphasizing what people in the community have already done for one an another, Mayor Miller said, “The state of our community is strong.”

Days before Mayor Miller took leadership, the community dealt with a tragedy as two homeless men froze to death. Within two weeks, more than 30 agencies and departments came together to open the doors of the former Brookdale Elementary School. This property became the Brookdale Warming Center; a warm space for people sleep, get clothes, food, and other amenities.

“That facility has served more than 400 people,” said Mayor Miller. “Individuals and families whose lives have been blessed by this caring, resourceful and purposeful community.”

This was just the beginning Macon-Bibb’s accomplishments. It has been a mission to keep our county’s streets clean with the Clean Streets Matter initiative. Together with Keep Macon-Bibb County Beautiful, the county held its first ever Clean Streets Matter county-wide cleanup. On the Mayor’s 100th day in office, April 11, more than 1,500 people in 80 different organizations came together to pick up trash in different neighborhoods. That day, they collected more 109,164 pounds of trash. Since the first day of the new administration, the county has removed more than 2 million pounds of trash from our streets and neighborhoods.

“Look around,” said Mayor said to the crowd Thursday. “The people next to you, the people at the next table, the people on the other side of the field. Every person who is here today impacts the lives of others because you are invested in the success of our entire community.”

“We are one Macon. We are strong, we are nimble, we are smart, and we are ready to work together as a team for success for our whole community,” said Mayor Miller. “Our motto is Forward Together because we’re in this together. Our success as a community is a team effort.”

The crowd at State of Community watched a video, showing what has been accomplished since the Mayor Miller took office. Once they all looked back, the Mayor began to look forward.

He mentioned his recent 30 in 30 initiative, where our county workers will tear down 30 blighted homes in 30 days. This is all in an effort to tackle the ongoing blight issue in our community. To learn more about 30 in 30, click here.

He also announced Kumho Tire of Georgia’s new expansion. The tire manufacturer will invest $21.8 million to add more 20,000 square feet to the existing facility and increase their annual production by 500,000 tires. Click here for more information on the expansion.

Mayor Miller thanked those who supported the Other Local Option Sales Tax (OLOST) as Macon-Bibb voters could now get the opportunity to pass the penny sales tax that will support many groundbreaking programs the administration has begun, including improvements to public safety, recreation and blight removal, as well as reduce property taxes.

Before the Mayor ended his speech, he brought #42 back up one last time.

“’Above anything else, I hate to lose’, Jackie Robinson said, and I’m here to tell you, each of you, I refuse to let our community lose,” said the Mayor. “The State of our Community is strong because we choose each other as our cause, and we will move forward together.”

Within seconds, there was a roar of claps that filled Luther Williams Field, followed by a standing ovation as the Mayor started to walk off the stage.

“I was very impressed with all of the accomplishments over the first 100 days,” said Linda Mosely, with 365 Marketing. She continued to say she is looking forward to the next 100 days. “It’s wonderful that we’re concentrating on the beautification, but we’re also catering to the people in Macon that need help.”

“I’m on the team because they’re doing some things that I think is really good,” said Yolanda Dotson, Macon-Bibb County resident. “I think the Mayor has done an awesome job and I’m excited to see what else is to come.”