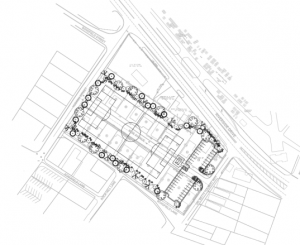 In the past several several months, 36 structures have been torn down as part of Macon-Bibb’s Blight Remediation Program. Each has been focused on a specific area or done in combination with another project so the funds and demolitions would have a greater impact on a community. In previous years, Macon-Bibb tore down single houses across the county, but after visiting cities successfully attacking blight and spurring revitalization, they learned a better effort was to tear down groups of blighted homes in the same neighborhood. That effort would also be much more sustainable if it were tied in with another project that would put something in the neighborhood where the houses once stood.

In early March, two houses in District 9 on Mercer Street were torn down to clear the area where a new fire station and sheriff’s precinct (4036 Napier Avenue) will be built; five more structures in that area are slated to be torn down to help improve public safety. The new fire station will replace the Breezy Hill station on Forsyth Street, and the precinct will replace the one currently located at 600 Pio Nono Avenue. Construction will be paid for with an estimated $2,250,000 in voter-approved Special Purpose Local Option Sales Tax (SPLOST) funds.

The first round of the Blight Remediation Program tore down 15 structures and was funded with $642,870 from District 1, 2, 4, and 5 funds. It included: