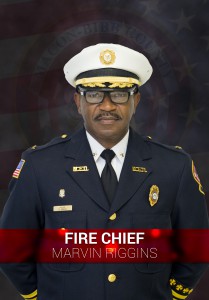 Chief Marvin Riggins, named Fire Chief for the Macon-Bibb County Fire Department, began his career with the department in 1979, rising through the ranks as a Private, Sergeant, Lieutenant, and Chief of Training. In June 2000, he was appointed Assistant Fire Chief, and in April 2008, he was appointed Fire Chief by Mayor Robert Reichert.

Chief Riggins’ professional goal is to ensure the citizens of Macon-Bibb County continue to enjoy the absolute best in fire and emergency services protection. His personal goal is to be a blessing to his family, and community. During his career, Chief Riggins has been recognized numerous times, including being named Firefighter of the Year three times and receiving the Macon Optimist Community Service Award, the Shields Club Award, Paramedic of the Year Award, and the Georgia Association of Fire Chiefs President Award.

Chief Riggins was born in Macon, Georgia, March 1961, and is a proud graduate of Twiggs County High School Class of 1979. He is married to the former Gloria Ann Stephens; they have a daughter, 20-year-old Keenya Monique. They are faithful members of the Union Baptist Church of Macon.